Home Business Marketing Essentials What is Rollout and the Difference of Roll Out?

What is Rollout and the Difference of Roll Out? 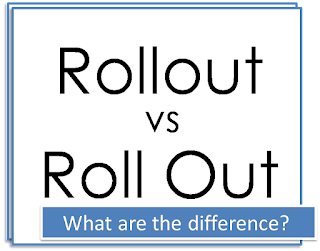 While reading the news about Dito Telecommunity, I came across to this Rollout. Now, as a dumb person, I'm not really good when it comes to business wordings. So, I decided to Google it and look for some answers. And its very easy for me since I really know how to look and do it.

Rollout is an informal term for the introduction of a new product or service to the market. A rollout often refers to a significant product release, sometimes accompanied by a strong marketing campaign to generate consumer interest.

So what is Rollout and what is the difference of Roll Out?

Rollout is a noun.
Roll Out is a verb.

What does rollout mean? Rollout is a noun. A rollout is a systematic introduction of something, like a product line or a brand new airplane.

What does roll out mean? Roll out, meanwhile, is a verb phrase. It can mean to introduce a product, like in the sentences below;

Rollout can refer as well to the strategy behind a product's introduction. Such a strategy can play a part in the product's success or failure. Some products, for example, are given limited rollouts targeting a particular region or set of customers. This may be designed to enhance customer interest in other regions or market segments.

Now with this, I finally understand what the news is talking about. They are just referring to Dito Telecommunity, since it is new 3rd telco major player in the Philippines, they will just going to start to operate this year and fully commercial in 2nd quarter year 2020.

Dito Telecommunity pushes back rollout to 2020

Dito spokesperson Adel Tamano said they have moved the target to the second quarter of 2020. "While has there been some talk of commercial operations starting as early as September or November, realistically our target is in 2020 because we want to put our network in place so we'll have good service," Tamano said in an interview with CNN Philippines News.