Home Anime Blog I'm A Fan Of Some Anime: My Top 4 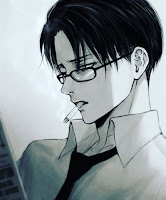 I'm here again, how are you doing?

We know that it's been a huge hit of the anime word. I like to start this post with my own way of experiences watching my favorite anime. I only select anime series that I can relate with. I know that there are other anime series out there underrated that is also very interesting to watch. But, my time was so busy and most of it are focus on clients.

One I have free time, I'm building or fixing some of the electronics that people ask me to, or I play some of mobile games with my guild mates. (my recent and current game is Evil Hunter Tycoon, this game was so far fits in me since it consumes less of my time, just let it grind AFK mode.)

Going back to this post, here are some of my favorite anime that I've been waiting for their next season. But I'm a Filipino, so I really wish to watch the latest tagalog dub anime version.

- this Action fiction, Dark fantasy, Apocalyptic and post-apocalyptic fiction with leading character Eren Jaeger together with his friend Mikasa Ackermann and Armin Arlert. Is the number one of my list. (I think it is very obvious in my profile picture, right? Correct, one of my idol is Captain Levi).

- this Adventure‎, ‎fantasy‎, ‎martial arts anime series is really one of my top list. I know that this anime was also the same author of Ghost Fighter. Yoshihiro Togashi is magnificent on this.

- you're right! When it comes to longest 3-point shot that was made by Kogure also known as Boy Labo in the Philippines did this. This comedy-sports story was very interesting because of the lead character Sakuragi Hanamichi.

- this anime is a Dark fantasy that leads with Goblin Slayer and Priestess.

I actually have a separated blog about anime. I decided to make it since it will be just a mess here in my Service Site. The blog is PinoyAnimeSaga If you wish to read something like this, please feel free to visit and subscribe if you want to follow my post updates.